A Lovely New Aromatic for the Perfumers – Omumbiri resin 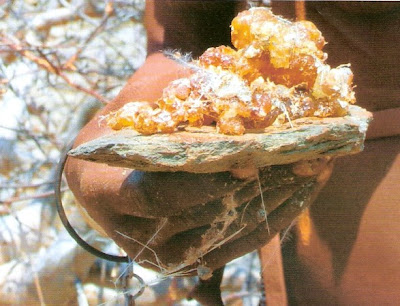 The Yahoo Natural Perfumery Group I host is a diverse, huge collection of lovers of natural aromatics from around the world. Recently, a member from South Africa wrote about a resin that is collected by the women of the Himba tribe of Namibia that shows promise in perfumery. The Himba collect the resin of Commiphora wildii – common name Omumbibi – to make body perfumes for themselves from this lovely fragrance material. It’s related to myrrh, but has a lighter, fresher scent. The Himba mix the resin with fat, a process we can equate with an unguent, much like those known in ancient Egypt.

Estee Lauder, Robertet and other large corporations have been investigating use of Omumbibi resin for a few years. Thankfully, Sophia, our NP Yahoo group member, was able to connect with the organization that is set up to protect the Himba and their aromatic resin and obtain some for experimentation by natural perfumers. This is the same organization that the corporations have been working with.

Anya’s Garden Perfumes were approved as an evaluator, as were several others, inlcuding some incense makers and distillers. My 700 grams arrived yesterday. The resins are divided into seven different “grades” for want of a better word, based on color and size. After I examine and evaluate the resins under different conditions – warming for incense, tincturing for alcoholic extract, and distillation for essential oil – I will report back to the organization. All who received the resins signed a release form that specifies our obligations to them re: our findings, and I regard this as a very good stance for them to take in protecting the property of the Himba. We are also not to sell any of the resin, but who can imagine a natural perfumer or botanical incense creator parting with any of this precious initial shipment? Not me 😉

The first thing I did was to get out the new device that Natural Perfumers Guild member Katlyn Breen of Mermade Magikal Arts is promoting as a quick and easy tool to evaluate resins and woods. The Aromatic Vaporizer Kit (AVK) is a breeze to use! What a clever gadget that can be used anywhere, anytime. The funny thing is it was a while before this old hippie realized what the AVK was first developed for, but let’s stick to resins and incense at this time, LOL. 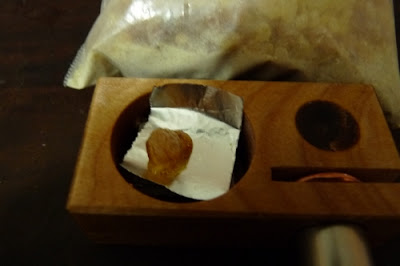 The AVK gently warming the golden nugget of Omumbiri resin – lovely scent, a bit of citrus and incense.
I then switched to the black Omumbiri resin, and here is a photo with a pen in the photo to help you visualize the size of the AVK and the resin – only crumbs are needed for the evaluation. 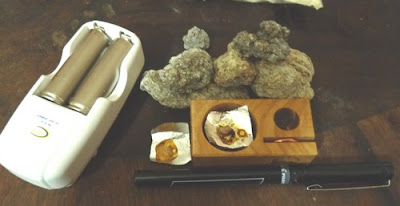 In the photo with the golden resin you can see where the silver battery is inserted to make the heating element work, and in the photo above you can see the charger case with the batteries in it.

BTW, the black omumbiri is, as you might expect, a bit darker in scent than the golden. I’ll have to read more of what Sophia wrote me earlier about the resins before I proceed. Some of the resin is collected before it drops on the ground. Maybe the darker resin is older, or has some soil mixed in? I’ll check further.

There’s a funny bit about how the women are the traditional collectors, but when the men of the tribe realized the interest in the resin, and how the women were making money, they decided to collect it, too. Problem is, they are not as careful and discerning in their collection methods, and were turning in bags of resin with a lot of twigs, dirt, stones, etc., and so the women insisted that their resins be considered separately from the men’s.

I will also check into something I read that the men wear a body perfume made from a different species (or subspecies?) of the same tree.

What a lot of fun and a true adventure, being involved in the first-ever independent, niche perfumer’s study of a new aromatic! I feel blessed.